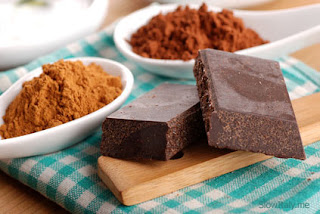 Chocolate – To those of us addicted to this elixir of life, the word alone makes us salivate. To others, it’s a word that conjures up thoughts of a delicate sweetness. To Sicilians in the Baroque town of Modica, chocolate is their heritage and a tradition that dates back to the 15th century. 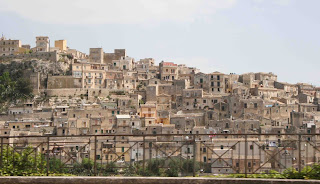 Modica chocolate, Cioccolato Modicano, is not like any chocolate you’ve tasted before. It has a bitter-sweet flavor with a distinct grittiness on your tongue. Chocolates we're used to eating usually have a long list of ingredients, but...the traditional Modica chocolate has only two ingredients – cocoa and sugar. There’s no added soy lecithin, cocoa butter or other fats. Modica chocolate originated with the ancient Aztecs original recipe called “Xocaoatl.”  Evidently, the Spaniards loved the treat so much that they brought the recipe back to Europe with them. 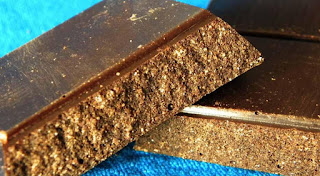 Modica’s artisan chocolate has been made the same way since the technique was brought in by the Spaniards during their 15th - 16th century rule. The cocoa beans are ground on a stone slab and processed at low temperatures. For this reason, the added sugar never melts giving the chocolate its distinct gritty texture. This grainy, aromatic chocolate is one of the most famous products of the Ragusa area and has earned international prestige. The chocolate is used in not only sweet but savory dishes. It can be eaten is squares or melted in a cup. 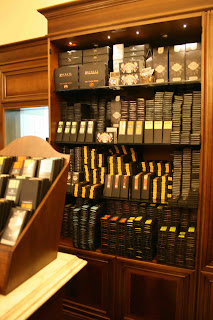 There are chocolate shops are all over Modica, however one of the most famous producers of Cioccolato Modicano is Bonajuto family. Their Antica Dolceria Bonajuto is the oldest chocolate factory in Sicily and has been in the same spot in the heart of Modica since 1880. The Bonajutos still produce the original two-ingredient Modica chocolate but have also added a variety of flavors like cinnamon, chili, pistachio, citrus, vanilla and others. 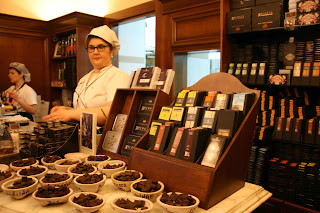 Cousin Peppino was nice enough to drive us through the narrow streets of Modica so we could experience this Sicilian treat firsthand. We stepped into the chocolate wonderland of Antica Dolceria Bonajuto and were immediately greeted by the delicate aroma of... CHOCOLATE. Samples dishes of the Cioccolato Modicano flavors were on the counter waiting to be tasted. Many other chocolate lovers also wanted theirs tastes so the line was long. I finally made my way up to  the variety of tasting bowls. 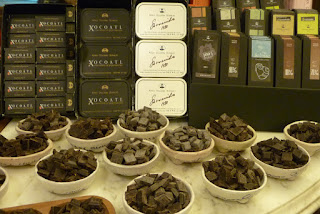 I tasted this one - I tasted that one. I tasted all of them. Which was best? There's no way to decide unless you keep tasting and tasting and then go back and taste again. For me, the final decision was the chili pepper: bitter-sweet with a little bite of pepper and, of course, the traditional grittiness. Yum! Chocolate Heaven!

But - Don't stop with the Cioccolato Modicano at Bonajuto's! Over the years the family has expanded to other chocolate candy treats and a variety of cookies as well.

Modica chocolate has never been produced industrially. The making of this chocolate is an art and naturally BEST experienced in Modica. SO the next time you just happen to be in Sicily, be sure to make your way to the Baroque town of Modica for your own taste-test of the Cioccolato Modicano. AND, don't forget to bring back a bar or two for me!

If you are receiving this post by email and would like to read other archived posts on my blog, go to
http://www.acappuccinominute.blogspot.com/