What's it like standing atop one of the most active volcanoes in the world? Amazing - absolutely amazing! 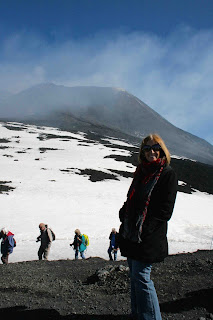 Visiting Mt. Etna was tops on our list of things to do during our May 2015 trip to Sicily. After all, hiking around a crater of an active volcano isn't something one can do every day. Right? So, just before leaving Sicily for home, we spent a day visiting "Montibello," or "Beautiful Mountain," the nickname given Etna by Italians.

Mt. Etna stands almost 11,000 feet above the city of Catania on the eastern coast of Sicily. The volcano has four volcanic openings or ‘summit craters’ – two in the center, one in the northeast and another in the southeastern side. About one quarter of the population of Sicily lives on its slopes. Do they live in fear? Heck no. Instead, they take advantage of its mineral rich and fertile soil with farms, orchards and vineyards. Yes - wine... truly excellent wine! 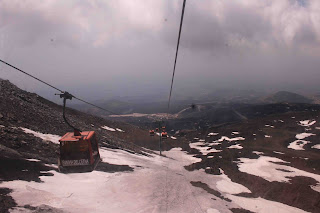 We started out with a 15 minute ride on the Funivia, a cable car that climbs up the south side of the volcano to the 8,215 feet level. 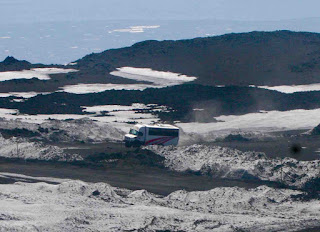 From there, we switched over to a multi-passenger all-terrain vehicle that traverses lava beds and snow for 20 minutes up to 9,514 feet. 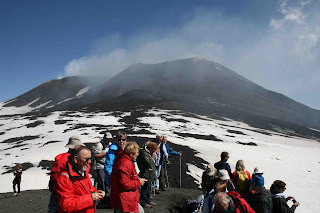 That's where everyone exited into a panorama of volcano, lava, snow and Sicily down below. The tour doesn't end there. 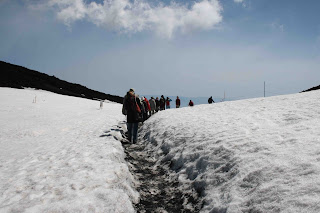 The group was then led on a breathtaking 360 degree hike  around one of Etna's craters by an experienced guide. It was about an hour's walk all the way around. 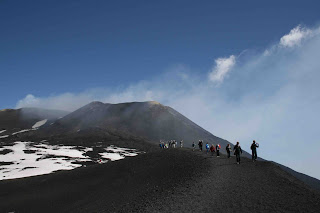 The trek is mostly single file around the crater and looking out onto snow and lava, some of which is 300,000 years old. 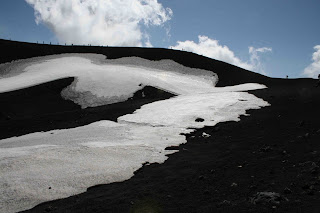 Yes, those tiny dots are people in our group hiking around the crater. 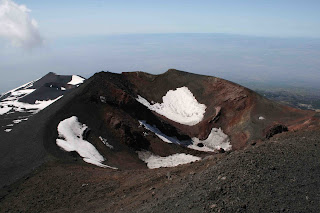 From a distance, one can view the fumarole activity - that is the steam and gases being emitted from Etna's crevices 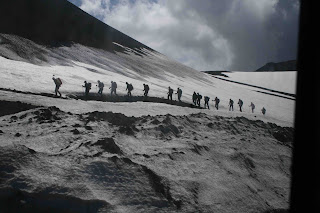 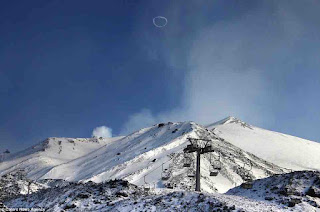 An interesting fact:
Occasionally, Mount Etna  will emit smoke in the rare form of rings, though we didn't get to see this rare occurrence.


Etna's most violent eruption was in 1669, destroying several nearby villages and the city walls of Catania. Its most recent eruption was on May 12, 2015...only two days after we arrived home. Darned! Bad timing. We missed it! Take a look at that eruption by clicking HERE.

If you're in Sicily and want to take advantage of this fantastic volcano tour, the cost is 62 euros per person (approximately $70 US) Do I recommend it? You bet! It's an experience you'll remember for a lifetime.


Posted by Nina Spitzer at 9:58 AM No comments: