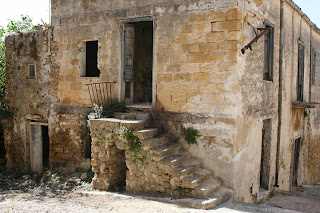 What is it that’s so fascinating about a ghost town? The ghosts, of course! Knowing people just like you walked where you are walking and lived their lives where you are standing. Perhaps a ghost or two are watching as you gaze around wondering, what was it like back then? 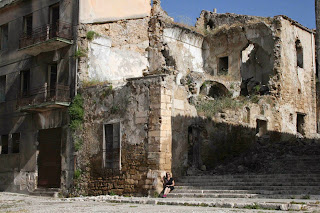 The 18th century town of Poggioreale was not yet a ghost town on January 14th, 1968. Then, on January 15th, while its residents enjoyed a family dinner together at day's end, the wind blew, the ground shook and an earthquake changed their lives forever. Residents ran outside to save themselves as buildings crumbled around them. Those who survived were devastated and those who died left behind family and friends who would hold the memory of that nightmare in their minds for the rest of their lives. 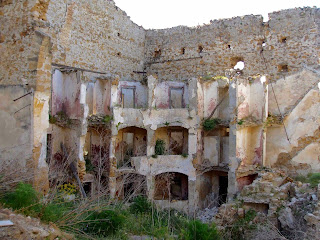 The 6.5 earthquake hit 14 towns in the Belice Valley area and left 370 people dead and 70,000 homeless. Most of the victims were women, children and the elderly as the young people had emigrated in search of work. Poggioreale, together with the towns of Gibellina, Salaparuta, and Montevago, was so badly destroyed, they had to be rebuilt kilometers away. Homeless residents lived in nearby shacks for over ten years while the new towns were being built. 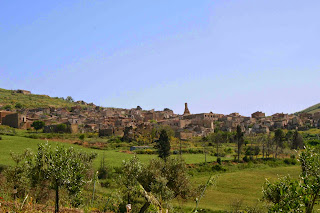 The ruins of Poggioreale from a distance

On a recent trip to Italy my husband and I visited Poggioreale. This ghost town is way off the beaten path requiring a drive through rolling green hills of beautiful Italian countryside. 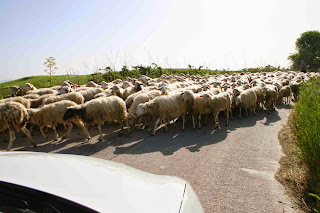 At a turn in the road, we came face to face with the local herd of sheep making its way home; its shepherd and his dogs following close behind. We stopped, let them pass, and then continued up the damaged, narrow road until it diverted at an impassable spot still damaged from the earthquake. 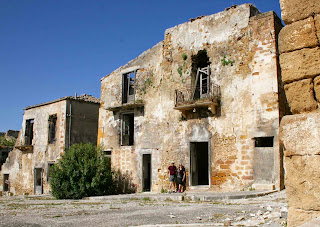 Upon reaching the entry to the town, we were met by a large, tall gate closing off the town to looters. Darned! After our anticipation and long drive, seeing the gate was a huge letdown. The gate, however, was attached on each side to a 6-foot wall, one of which was against a sloped embankment. Ahhh-solution! Climb the wall! Not being looters, the only thing we’d planned on taking from Poggioreale was photos. So we did, indeed, climb the wall to get inside. 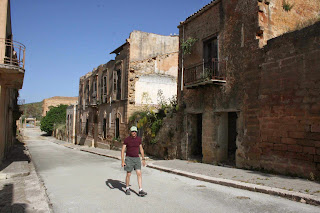 Walking the streets of Poggioreale was truly eerie. Buildings and roads are all in a state of ruin. Once a busy little town, Mother Nature is now the only one at work sending trees and shrubbery into places that once were homes. 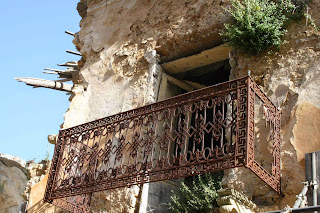 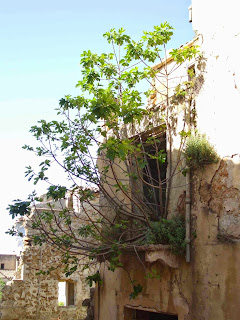 Silence prevails. The main piazza in the center of town, once bustling with people, mules, cars and daily life, is now deserted. The sounds of animals, people working, and children playing have been replaced with only the squawking of birds circling overhead. 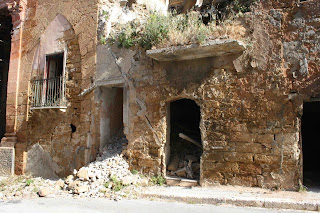 The ghosts who were peering around broken doorways and windows neither said a word nor made a sound while we explored and took our photos. They just watched and wondered when the intruders would go away and leave them in peace with their solitude, memories and eternal love for this once beautiful little town. With respect for them, we silently and quickly took our photos of Poggioreale, then climbed back over the wall and continued on our way.

For a video of the Poggioreale ruins ("Saving Poggioreale"), click HERE.

If you are receiving this post by email and would like to read other archived posts on my blog,
go to
http://www.acappuccinominute.blogspot.com/
Posted by Nina Spitzer at 4:13 PM No comments: