Not Your Average Shopping Mall 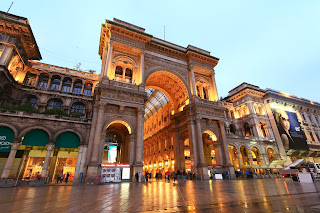 Yes. It’s a shopping mall, but the minute you walk into Galleria Vittorio Emanuele II, you'll believe you’ve stepped into another dimension. Your mouth drops from its grandeur. The massive roof, four stories above, is a huge mesh of curved glass and cast iron letting in light from above. Its interior streets, lined with elegant shops, are wide and crawling with visitors. 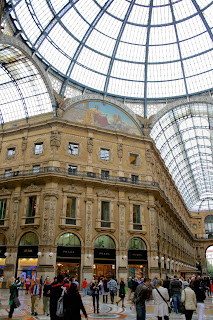 The Galleria, located in the heart of Milan, is named after Vittorio Emanuele II, the first king of the unified Kingdom of Italy. The mall’s two glass-vaulted arcades are in the shape of a plus-sign and intersect into an octagon covering the street that connects Piazza del Duomo to Piazza della Scala. 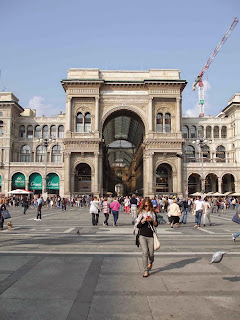 The central octagonal space is a huge glass dome. 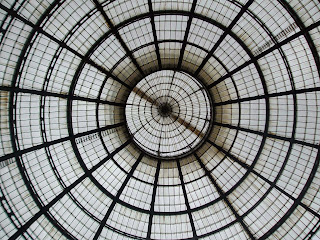 Looking up at the center dome.

As structurally amazing as this mall may be, it is not a modern structure. It’s actually one of the world’s oldest shopping malls as well as a predecessor of our modern day malls. It's hard to believe this mall is from the 19th century. It was designed in 1861 by Guiseppe Mengoni, a young architect from Bologna, and built between 1865 and 1877. On the evening before the mall’s inauguration in December of 1877, Mengoni suffered a fatal fall from a scaffold and was never able to celebrate his success. 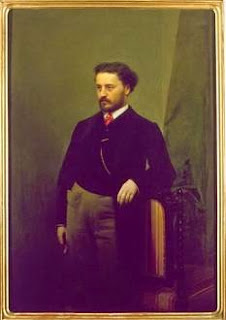 Looking up at the roof in the Galleria Vittorio Emanuele II is just as amazing as looking down. The floor of the galleria is elaborately decorated in mosaics of signs of the Zodiac. In addition, in the center of the Galleria, where the two arcades meet, are four coats of arms of Italy’s former kingdoms: Milan, Florence, Rome, and Turin. 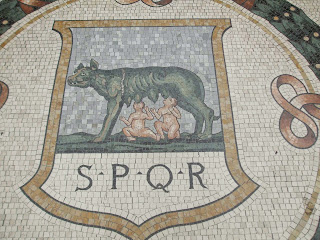 Rome’s coat of arms design is of the twin sons of the God Mars, Romulus and Remus. They are drinking from the she-wolf who raised them when they were abandoned in the woods. As the story goes, a shepherd took them home and adopted them. Romulus went on to kill his brother and proclaim himself the first king of the town, naming it after himself – Rome. 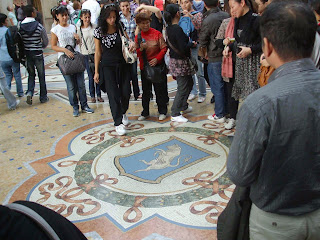 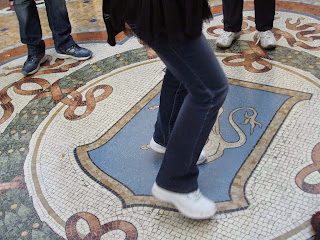 Turin’s icon is a dancing bull. According to legend, you will have good luck if you place your right heel on the bull’s testicles and spin around three times. The bull isn't too happy about this idea since all that spinning is damaging the mosaic tiles on his private parts. Me?  I had no desire to give it a try.

Galleria Vittorio Emanuele II is and has always been a vision of opulence with its streets lined by designer stores, art galleries, jewelry shops and elegant cafés. Somehow, McDonald’s found a way in and had been an occupant for twenty years. In 2012, however, McDonald’s was denied the renewal of its lease, no doubt because it didn’t fit the image the mall was trying to convey. 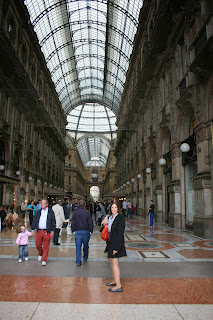 In April of 2015, Galleria Vittorio Emanuele II celebrated its 150th anniversary. The celebration included a launch of guided tours along its rooftop walkways as part of a multi-million euro restoration program. Now, for the first time ever, visitors are able to stroll along two iron-and-glass-covered walkways and around the enormous glass central octagonal dome over 118 feet high.

How cool to also see the magnificent Duomo and Piazza della Scala from that vantage point high above the street crowds! This program, along with others, was created in anticipation of the 20 million visitors expected to attend Milan’s Expo from April to October. The rooftop walk is an opportunity you won’t want to miss. Click HERE for more information. 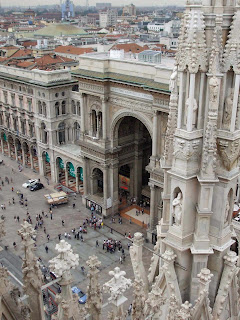 View from atop The Duomo

When you’re in Milan, Expo or not, be sure to set aside time for a stroll through the Galleria Vittorio Emanuele II. You won’t be disappointed. If you plan on shopping while there, be sure the limit on your charge card is high: you'll need it. If you're on a budget, no fear - taking pictures is free!
Ciao!
- Nina Spitzer

Posted by Nina Spitzer at 8:54 PM No comments: