The Picci Family Carousel in Florence 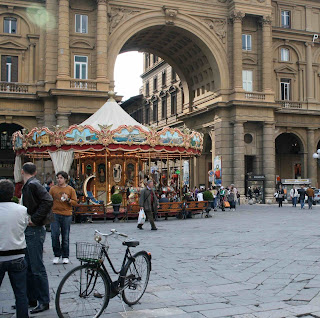 There’s something magical about a carousel. Maybe it’s because, no matter how old we are, we become a kid again when the music is playing and the horses are going round and round. When it comes to carousels, none is more beautiful than the Picci Family Carousel in Florence, Italy. 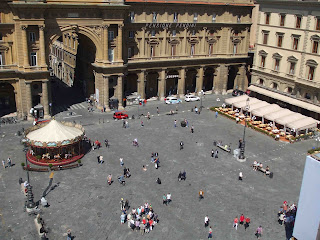 The beautifully restored carousel, located in the Piazza della Republica, dates back to the early twentieth century. The carousel was built on the site of the Mercato Vecchio, the old Roman Forum and center of the Roman city. It’s been run by four generations of Picci’s and is currently run by Carlo Picci and his wife. 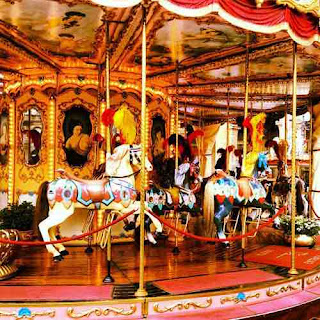 It’s small for a carousel with only twenty plumed horses with plenty of space in between. This, according to Carlo Picci, allows plenty of room between horses for mothers to stand beside their bambini while the horses go up and down and sway back and forth. The carousel also has two gilded “king’s carriages” one of which is under a gilded crown with red and green gems.

The colors of the carousel are mostly bright reds and blues, and the beautifully painted horses stand proudly with tall, elegant plumes upon their heads.  The inside columns have paintings of Roman gods and flirting cherubs float on the ceiling. On top of the ride are painted panels of different Italian cities like Pisa, Rome, Bologna, Parma, and Venice. And…the carousel also has two flowerpots filled with fresh plants. 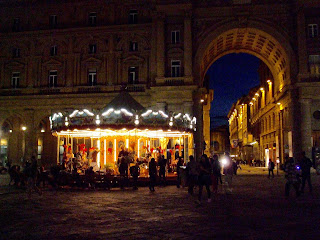 The antique carousel is definitely a site to see. It’s beautiful during the daytime and splendid all lit up at night. 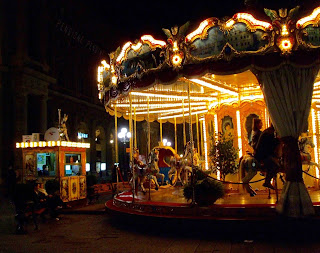 The Picci Family Carousel is in operation daily from about 10 in the morning until about 8 at night November through May. It only takes a couple of euros to hop on a horse and, for a few wonderful moments in Italy, become a kid again!

If you are receiving this post by email and would like to read other archived posts on my blog, go to
http://www.acappuccinominute.blogspot.com/
Posted by Nina Spitzer at 8:19 PM No comments: