David: What a guy! 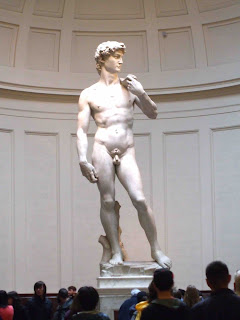 Originally, Michelangelo di Lodovico Buonarotti Simoni (aka Michelangelo) was commissioned to create the statue for the Duomo, the Cathedral of Florence. The original plan was for it to be one of a series of statues for display in niches 262 feet above ground. Michelangelo was asked to use an enormous piece of marble rejected for its imperfections by two other sculptors over 25 years before. No problem. The 29 year old Michelangelo agreed to take on the challenge and chiseled away at it for four years.

What emerged from that imperfect piece of stone was... David. 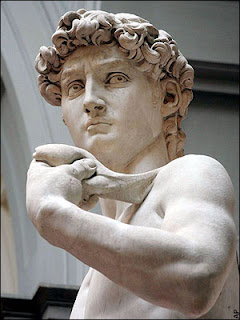 "David" is the young David of the David and Goliath Bible story. All other sculptors before Michelangelo had always sculpted him in a position of victory after the battle with Goliath. Michelangelo's version instead shows David before battle, leaning against a tree stump and holding his slingshot over his shoulder. His eyes are fixed in concentration over the ensuing battle. David's expression, bulging veins, muscular abs, and tight thigh muscles show him lifelike (despite his size) in all his grandeur. 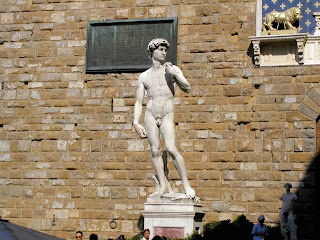 Replica of David in the Piazza della Signoria

The end result of Michelangelo's "David" was perfection...perhaps too much prefection. Upon its completion, the Vestry Board that had originally commissioned the work decided David was too perfect, and perhaps too heavy, to be displayed so high above the city. So the decision was to instead display David in the courtyard of the Piazza della Signoria, the political heart of Florence. There, he became a symbol of the defense of liberties embodied by the Republic of Florence. Soon after, the tree stump David leaned against his slingshot were gilded. The gold enhancement was beautiful, but unfortunately was eventually worn away by weather and time. 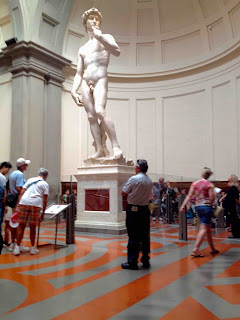 In order to protect David against further weather damage, he was moved to the Accademia in Florence (1873) and replaced by a replica in the Piazza della Signoria. There, in the Accademia, David can be enjoyed by visitors from as nearby as only a few feet away. Seeing David up close is a breathtaking experience. You'll find yourself circling him more than  once, marveling at how Michelangelo helped this awesome and perfect David emerge from a huge, imperfect piece of marble. 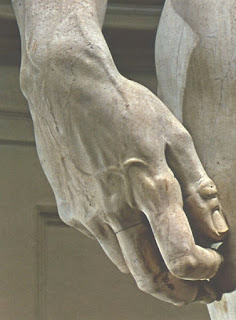 Take notice of his disproportionate hands and head. It's believed these over-sized exaggerations of proportion were intentional by Michelangelo since David was originally meant for display at a height where the important parts needed emphasis. 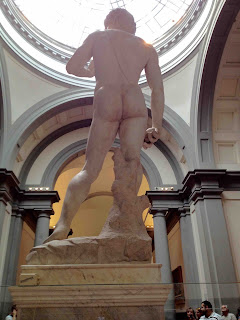 Are you planning a visit to Florence, Italy some time soon? Be sure to add the Accademia onto your list of things to do. When you visit David,  I know you, too, will agree that he is one gorgeous hunk-a-man!

If you are receiving this post by email and would like to read other archived posts on my blog,
go to
http://www.acappuccinominute.blogspot.com/
Posted by Nina Spitzer at 4:21 PM No comments: